Today, it has become a jungle for younger generations to search for their first property.

With hundreds of different mortgage schemes, Help to Buy ISA’s and loan repayments, it is understandable why young people get confused when looking to purchase their first home.

However, what makes it even more complicated is the increasing difficulty to purchase a home. Whether it be for the rising house prices, increases in rent payments or for lack of money, young people have been pushed to the side so that money (and greed) can lead the way.

This article will analyse and summarise the vast array of data that has been published over the past years to help make it a little easier to know what to do in the future.

The first building block that has made it much difficult for younger people to enter the housing market.

With currently less than 12% of all homeowners being under the age of 35, there seems to be a systemic problem in supporting young people on making their way onto the property ladder.

The huge increases in house prices has also meant that young people need to save up much more money than before so they can secure a mortgage that will be beneficial and payable over a long period of time.

Current deposit schemes do offer some flexibility for younger people, however, as is shown in this graph, with price reaching far into the £200,000 price range, they are still not likely to be in a position to put down a large amount for a deposit.

Lenders have never look favourable on young people in comparison to those of an older age, however, it has been reported that younger people have some of the best credit scores in the country, with many being much less frivolous with their money.

The steady increase seen over the past seven years shows how unaffordable houses have become which puts young people at a huge disadvantage when looking for their first home.

A huge factor in being able to purchase a property is having savings.

However, in the currently climate, rent costs have followed suit with housing prices and have also increased, showing a £12 per week rise since January 2015. 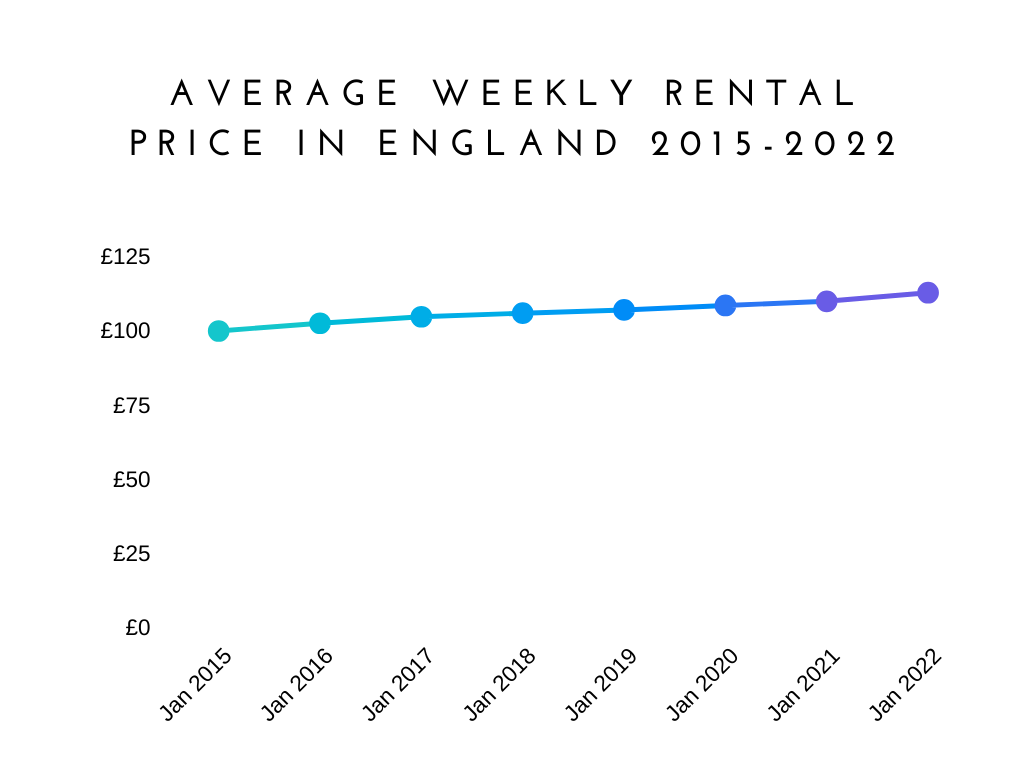 The data shown here shows the steady increase of the average rent payments made between 2015 and 2022.

It is clear to see the rise in price which equates to around £12 per week as mentioned before. This increase totals up to over £600 extra being paid each year in comparison to 2015.

This is the type of money that could be used for savings to eventually look for a house, however, because so much is being take in rent, young people are putting almost half of their average monthly wages onto rent payments.

This gives very little room to create a financial cushion at all, let alone builds savings to buy a house, coinciding with the increases in utility bills and every day expenses too.

This seems to be one of the main problems with young people getting onto the property ladder and besides the rising house prices, the percentage of their monthly income at an apprenticeship, internship, entry-level role or national minimum wage that goes onto their rent payments makes it almost an impossible job to build strong financial stability.

These high increases in rent and property prices do not mirror that of the average wage for a young person and it has been reported that house prices have doubled twice as fast as the average minimum wage.

It is not an easy position for young people to be in and has been described as the ‘worst time to be a first time buyer’.

With prices looking to continue rising however, now may be a better time to purchase a property than in 15 years time where it has been predicted that the average house may cost almost half a million pounds.