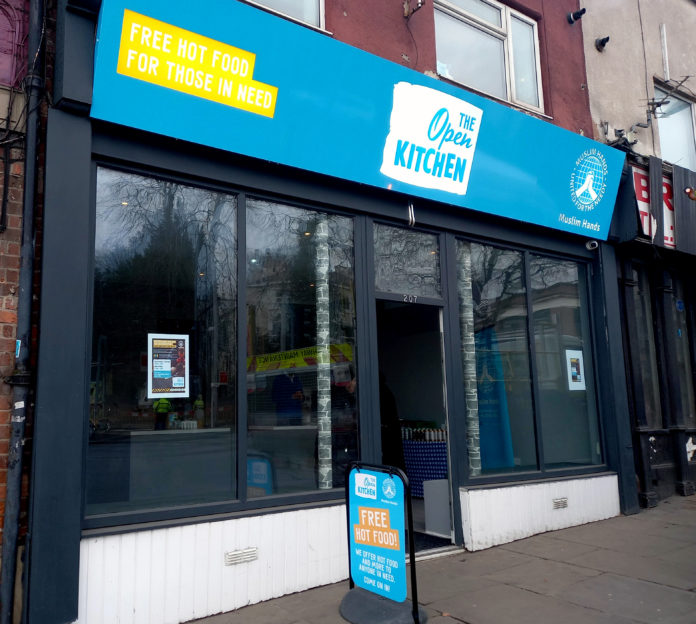 A charity’s new community kitchen is offering free meals every day at their city centre outlet.

The venture is funded by international aid agency Muslims Hands’ which works in over 30 countries.

Anyone who asks for food will be served.

The manager Imran Khan said: “Nottingham is one of the poorest city in the UK.

“There are a lot of good charitable organisations here, but we wanted to serve food during day time.

“We don’t any one to go hungry, we serve hot meals, biscuits, fruits, drinks and water

“We don’t leave out anyone who is struggling and in need of food.”

All the regular customers are happy with the services of the kitchen.

Open Kitchen user Mathew Mitchell, 38, said: “I have not been hungry ever since they opened this kitchen.

“Me and lot of other people doesn’t have to wait till 7pm to get food.

“When I wake up in the morning, I don’t have to worry about food anymore.

“They are very nice people.”

Regular users of the shop say Imran and his colleague Shaista – who volunteers at the outlet – make them feel welcome and respected.

Another local who did not want to be named said: “They are nice.

“You treat them with respect, and they treat you with dignity.

“It’s great that they opened this kitchen.”

Muslim Hands began their charity work as a small group of volunteers began collecting money, clothes and medicine for the people of Bosnia, during the Bosnian war in 1993 in Nottingham.

Today their aim is to tackle the root causes of poverty around the world, and they are passionate about working beyond the provision of immediate relief, towards supporting communities over the long-term.