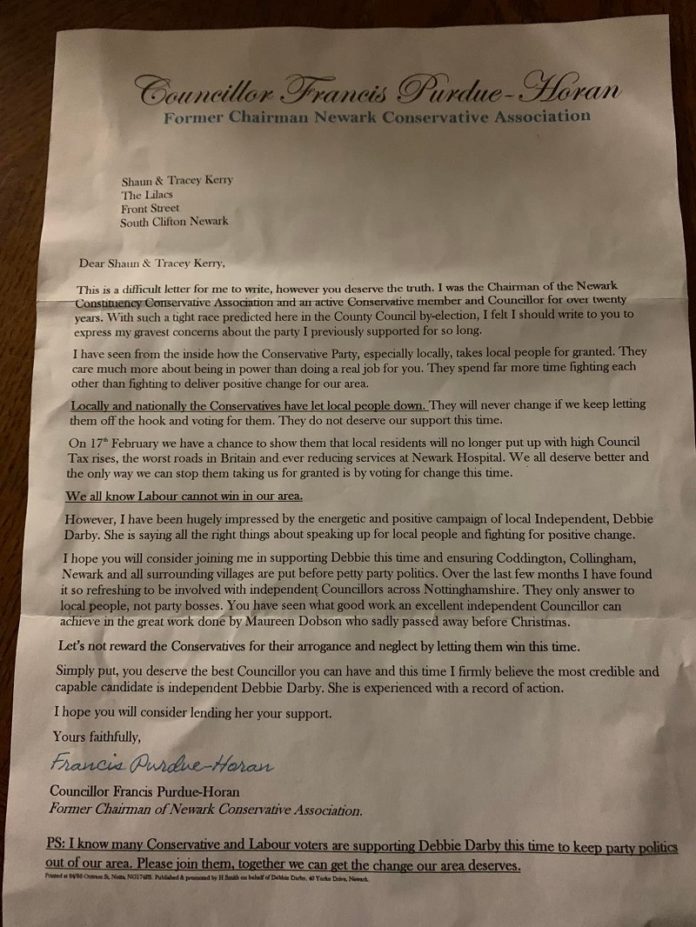 The former Chairman of the Newark Constituency Conservative Association has said “locally and nationally the Conservatives have let local people down.”

In a letter to Shaun and Tracey Kerry, Francis Purdue-Horan has expressed his concerns about the direction the Conservatives are taking.

Cllr Purdue-Horan is calling for Mr and Mrs Kerry to show their support for Independent candidate Debbie Darby in the upcoming Collingham by-election and has stated his support for putting Coddington, Collingham, Newark and all surrounding villages being put before petty party politics.

The Collingham by-election is set to take place on February 17.

“We all deserve better and the only way we can stop them taking us for granted is by voting for change this time,” said Cllr Purdue-Horan.

The councillor called for support for the Independent because he is sceptical of Labour’s chances, “We all know Labour can’t win in our area.”

Cllr Purdue-Horan currently stands as deputy mayor of Bingham Town Council and was previously an active Conservative member and Councillor for over twenty years.

Mrs Kerry was previously Mayor and Deputy Mayor of Bingham.

She posted the picture on Truer Bingham Facebook on January 29.