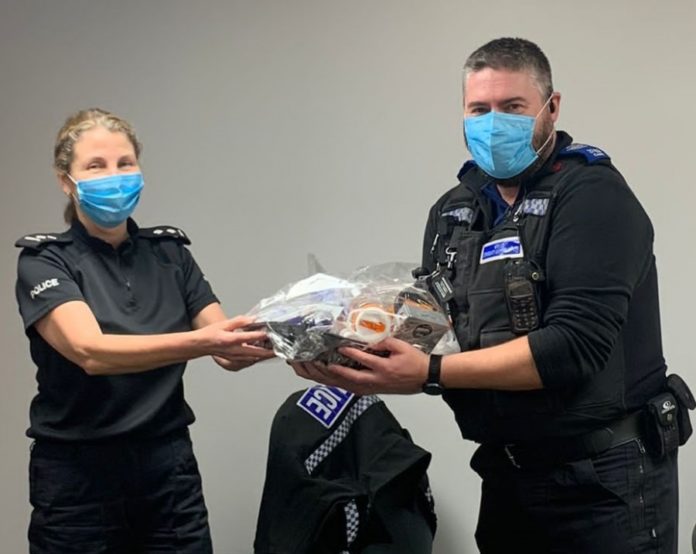 Nottinghamshire police have paid tribute to their “unsung heroes” community officers for their contribution in keeping the community safe.

PCSO Chris Lowe, who is based in Bulwell, was nominated among 12 neighbourhood officers and received a gift bag from his colleagues as a recognition to his service.

The 49-year-old has been working on a number of initiatives like the Premier League Kicks football project in Bulwell in 2020, working with partners and Nottingham Forest Football Club.

PCSO Lowe has also worked in partnership with local schools in Bulwell and helped organising activities for vulnerable youngsters to divert them from crime and antisocial behaviour.

He said: “It was a nice surprise to receive the hamper which was gratefully received. My colleagues managed to keep completely under wraps and caught me while I was on a quick lunch break!

“Neighbourhood policing is a whole team effort. We’re often the faces that people see on a daily basis, and they feel able to talk to us.”

Inspector Christine Busuttil, who nominated him as an ‘unsung hero’, said: “PCSO Lowe is fully motivated and is proactive with his work on a daily basis, working with partners, building strong relationships through attending community meetings and building trust and confidence through ward walks which embodies core neighbourhood policing work.

“He will identify problems across Bulwell and take positive steps to address these to improve the lives of the community he serves.

“One example of this was his work with Nelson House which houses vulnerable individuals with some complex emotional and mental health needs.

“Chris sets an example for others on the team to follow.

“He will put himself out, going the extra mile to improve the community he serves, and changes his shift regularly to accommodate many meetings, including cadets.

“He is a credit to my team and never does anything by halves.”

Last month, Nottinghamshire Police has celebrated its neighbourhood police force during a week of action to honour the work of officers, teams and volunteers all year round.