Book lovers in Nottingham are angry with the council’s move to make libraries digitalised and have started an online petition.

Twitter accounts ‘Nottinghasm’ and ‘ex libris masked booksellers’ along with many others are urging their followers to sign a petition against the closing down of three libraries in Nottingham.

Nottingham City Council recently proposed to close three libraries – in Aspley, Basford, and Radford – as part of their project named the ‘The Next Chapter’.

Some members of the public are unhappy about the incompletion of the promised central library.

The petition, started by Andrew Porter, is nearing its target of 1,500 signatures in its bid to get local attention.

Tweets are appearing calling the move ‘libricide’ (the destruction of books) and Nottingham could be the first UNESCO City of Literature without a functioning library service.

The council has launched an online 12-week public consultation on proposed changes for library services.

The creator of ExLibris said: “Libraries offer much more than books, a chance to talk with someone if you’ve been alone all week.

“The areas where these threatened libraries are situated need libraries even more than most.

“One of the libraries under threat is Basford Library, where I worked for many happy years, watching children grow up, helping older people discover their family history, teaching beginners how to use computers, delivering books to regular visitors now unable to leave their houses, stamping out books, and tidying, shelving, shelving, shelving.

“I saw what a lifeline the library was. It’s imperative that this lifeline isn’t pulled up.” 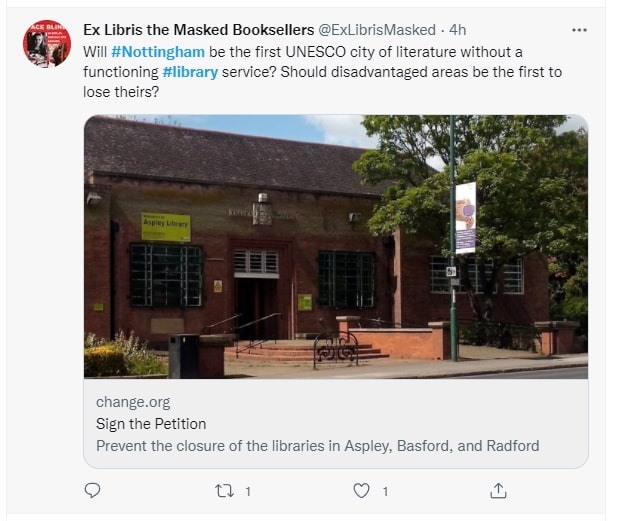 He said: “We do not have a Central Library.

“How short-sighted can you be to close the main library in Angel Row before they have sold it?

“They should have waited until the new Central Library was open before looking to close these libraries.

“They are ripping communities apart and they will pay for it in the end – these are community meeting places.”

Recent statistics show 22,680 annual visits were made to Basford Library, 7,920 visits at the Radford and Lenton library and 38,820 visits in Aspley.

Many people in Basford have already registered their resentment towards the shut down of libraries.

Barbra Fafinsk, 40, a Basford resident, has been taking her children to the library since they were toddlers and uses it regularly.

“It’s just a really nice place to have around in our community.

“I don’t think I would go to the city centre to use the library.

“I was coming with my children because they do a toddler group as well.

“It will be a shame.

“[I’ve been coming here] for quite a few years. My boys are growing up so they can actually read.”

The tweets against the move has recently gained momentum and the petitioners are hoping to create an impact on the councils decision soon.