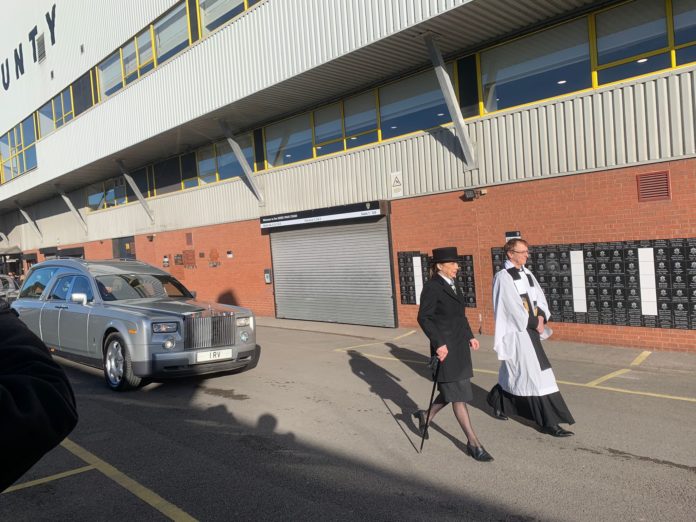 The former BBC commentator, who was known by many as ‘the voice of Notts County’ having covered the Magpies over nearly 3,000 matches, passed away on January 10.

Colin’s final journey will depart from Meadow Lane on the day, allowing supporters to pay their respects.

Chief Executive, Jason Turner, said: “Everyone at Meadow Lane is heartbroken to have lost not only an iconic figure in the club’s history, but also a great friend.

“I have been incredibly privileged to have got to know Colin well since my arrival at the club six years ago, working closely with him on many projects, travelling with him to away matches and enjoying his company at social events.

“As everyone knows, Colin was staunchly passionate about many things, not least Notts County, and he was an inspirational figure to be around.

“Naturally he will be best remembered for his commentary work, to which he dedicated such a huge part of his amazing life, but he did so many other things for the club which must never be forgotten.”

County’s all-time top-scorer, Les Bradd, who knew and worked with Colin over several decades, added: “I first got to know Colin in my early days as a player, when he was working for the Nottingham Post.

“I found him to be an honest, trustworthy person – someone I could consult with in good faith.

“We built up a good relationship and continued to have a great rapport after he moved on to Radio Nottingham.

“His support and help continued beyond my footballing days, especially with his dedicated work as chairman of our Former Players Association but also as an events host and many other things – all without ever seeking a penny from the club.

“There are many names you could consider for the title of ‘Mr Notts County’ but his has to be high on the list for all he has done for the club and the way he always championed our rich heritage.

“He was a great man and will be sadly missed.”

His funeral, which is an invite-only event, will be held at St Mary’s Church on High Pavement in Nottingham.

Follow updates on CBJ Target using our live blog below…