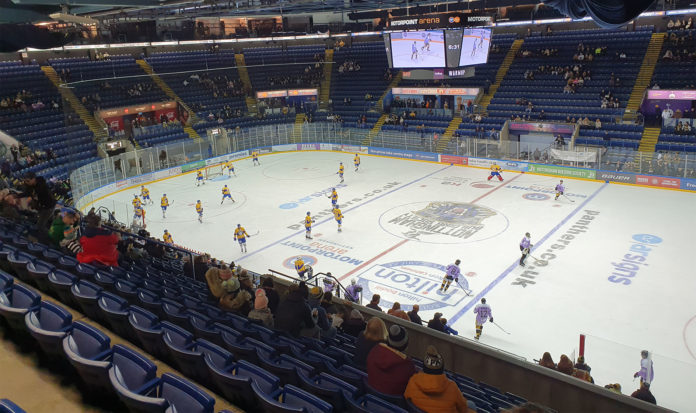 The Nottingham Panthers raised £1,750 for the Notts LGBT+ Network ‘out of the blue’ during the Premier Sports Elite League’s Pride week in January.

Notts LGBT+ Network are a volunteer charity who exist on about £15,000 per year and were approached by the Nottingham Panthers ‘out of the blue’.

A spokesperson from the Network said: “The initiative came entirely from the Panthers. We had an e-mail out of the blue asking whether we would like the fundraiser to go ahead. Notts LGBT+ Network was both surprised and delighted to get a substantial donation from Nottingham Panthers.”

The initiative saw the Panthers design Pride jerseys with the numbers and names on the shirt using a rainbow pattern, also containing the message ‘hockey is for everyone’.

If you managed to secure yourself a Panthers' Pride #HockeyIsForEveryone jersey you will be able to collect it at this Sunday's game from the official merchandise booth outside of Ice Locker.

Just bring your receipt slip along and your jersey will be handed to you. pic.twitter.com/MlTw2OvnsY

This message is important in sports in general due to problems that have been rife throughout history.

The Network added: “For many LGBT+ people sport is avoided due to its homophobic associations.

“Many sports organisations say that they are involved in promoting and supporting diversity, but more need to put what they say into practice.”

For many organisations, within sport and without, Pride is just an opportunity to keep up with the ‘accepted’ norm and show support for a small period of time whilst taking no meaningful action.

Notts LGBT+ Network are glad that the Panthers have made the step of helping to make meaningful change by raising funds that could be invaluable as the Network has ‘grant cuts looming’.

Thank you for showing your support for the Premier Sports Elite League's Pride Week & helping raise £1750 for our local Nottingham LGBT+ charity. https://t.co/lsB0lH6pvp

Elite Ice Hockey League Media Manager Luke Fisher said: “We made a very clear commitment during the 2019/20 season that we wanted to promote the message that ice hockey is a safe space for LGBTQ+ athletes and fans alike.”

This clearly shows that the initiative has grown beyond early stages and is starting to put meaningful change to match their words.

The Network urges “That clubs should not wait until some of its players/supporters come out, the club itself needs to ‘come out’ as LGBT+ friendly by taking actions that demonstrate this.”

It is clear that sports clubs are starting to make more meaningful steps to correct problems of the past, rather than just ceremonial gestures.

They explain that the Network are beginning to have ties with other clubs in the local area too.

Mansfield Town are working in conjunction with the Network to ‘promote diversity’ and the LGBT+ Network are happy to see the progress made.

Visibility is the most important matter for people from the LGBT+ community, especially in sport, after years of not feeling welcome at grounds ‘it is the visibility of many LGBT people that has begun to turn the tide on this issue’.

Whilst they would never ‘expect’ any support from sports teams, it is ‘clearly something that [they] can hope for’ going forward.

The Panthers have made a sizeable contribution and shown the way forward for local organisations to follow, if you would like to get involved with the Notts LGBT+ Network then visit: