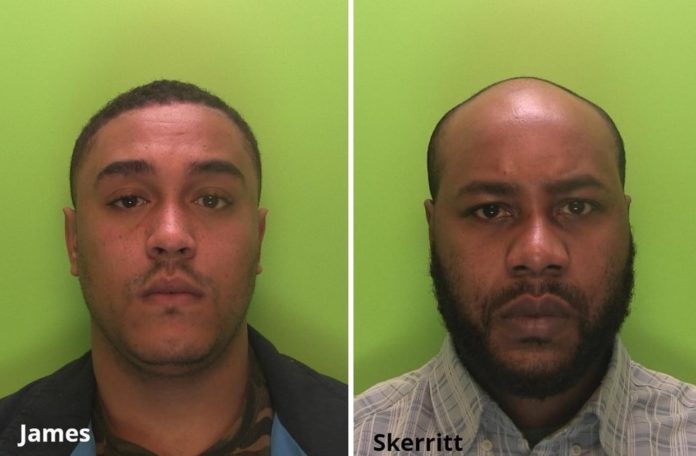 Two men have been jailed for their part in “brazen and cowardly” drive-by shooting outside a busy city centre bar.

A young woman was hit in the arm when a gunman riding a moped fired five shots toward the Das Kino bar in Nottingham city centre on the evening of November 3, 2018.

Nathaniel Skerritt, aged 34, was found in possession of the .25 calibre pistol used to fire the shots when he was arrested as part of the investigation.

Tarquin James, aged 31, was linked to the motorcycle by a trace amount of DNA found on a piece of string used to attach a false licence plate to it.

Last week they pleaded guilty to charges of conspiracy to possess a firearm with intent to cause fear of violence and appeared at Nottingham Crown Court yesterday for sentencing.

Skerritt, formerly of Valley Road, Sherwood, also admitted to a charge possessing cocaine and had already been found guilty of possessing a firearm and ammunition.

He was jailed for a total of six-and-a-half years.

The shooting was linked to an incident a month before when multiple shots were fired through the window of a house in Upper Langwith on the evening of 2 October.

A third man, Jordan Murray, was jailed in May for a total of 18 years for his role in both shootings.

His DNA was found on the accelerator grip on the moped used in the Das Kino shooting.

It was proven that he had driven the shooter, Dianvelli Williams, from the scene in a Land Rover that was later found burned out.

Williams, 23, formerly of Silk Mill Avenue, Leeds, pleaded guilty to conspiracy to possess a firearm with intent to case fear of violence and was jailed for six-and-a-half years.

Officers were not able to prove who fired the shots outside Das Kino but were able to send each of the three men involved to jail by linking each of them to the wider conspiracy.

“These men are all dangerous criminals who conspired to use firearms on the streets of Nottingham.

“This was a brazen and cowardly shooting that could very easily have led to very serious injuries and loss of life.

“I would like to pay tribute to all the officers and staff who have put in so many hours into investigating this case and bringing these men to justice.

“Their meticulous attention to detail and forensic analysis of the evidence allowed us to prove beyond doubt the involvement of these men put them behind bars where they belong.”

“I hope this case serves as a warning to others about just how seriously we take firearms offences and the lengths we will go to bring offenders to justice.

“So, my very clear message to people thinking of bringing firearms onto our streets is this: we will catch up with you and our brilliant team of detectives will leave no stone unturned in order to bring you to justice.”

Tiyanna Clayton, 20, of Nottingham Road, Basford, was sentenced in May after being found guilty at the same trial of conspiracy to pervert the course of justice.

She was found to have facilitated calls between Murray and a witness inducing them to change the statement they had provided to the police.

She was given a 12-month prison sentence suspended for 15 months.