A retired reporter from Tamworth now finds herself in the news as her husband appeals for help following her diagnosis of Huntington’s Disease.

Together with her husband Andrew, Sonya used to perform talks and readings at local churches around the town.

Andrew is a professional swing vocalist alongside his job as a software engineer and the whole family are all very musically gifted. The couple’s children, Jude 20 and Cara, 17, also performed in local musicals.

Sonya’s husband and children are all keen performers. See video above 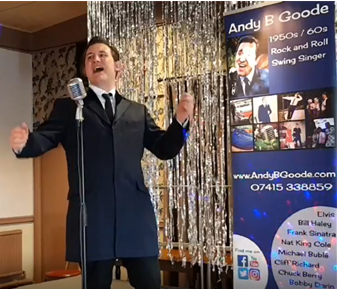 Now the family are calling on the community they have served to help them adapt their home to accommodate the changing needs Sonya’s condition has brought.

Mr Britton said: “Sonya struggles with spillages, burns and most commonly, the stairs. Most people with Huntington’s Disease end up dying from choking or stairs so this is a real worry of ours.”

In their home in Stonydelph Lakes, Tamworth, both Mrs Britton’s bedroom and bathroom are upstairs which makes it difficult for her to navigate the house.

After asking for advice and looking into a stair lift, the family were told that a stair lift is not really a safe option for someone with Huntington’s Disease with decreasing co-ordination.

Mr Britton added: “Sonya does not want to move from this house as she grew up here and her surroundings are familiar.

“FAMILIARITY IS IMPORTANT FOR PEOPLE WITH HUNTINGTON’S DISEASE.”
– ANDREW BRITTON

“Routines and familiar surroundings help them to keep their independence and sense of self for longer.”

After researching, Mr Britton found that to get an elevator added to the side of the house would cost around £12,000 and another £8,000 for the brick enclosure.

They have set up a GoFundMe page to raise funds for what Mr Britton cleverly named “Sonya and The Great Glass Elevator”.

So far they have received £5,000 in donations towards the elevator.

After the huge impacts Sonya has made in her friendly Tamworth community, the family have received large efforts of support from so many of the people Sonya has touched throughout her life, however, the cash raised for the ‘elevator’ fund is yet to reach its target.

The Huntington’s Disease Association are due to hold a virtual fundraiser called the 2.6 challenge on April 26th, 2021 with the aim to include anyone of all abilities. 2.6 miles, 2,600 steps or even 26 star jumps are valid, as long as you include the numbers 2 and 6.

All money raised will help lots of families just like the Britton’s.

To get involved in the HDA fundraiser: https://www.hda.org.uk/events/2-6-challenge

To donate to The Great Glass Elevator for Sonya: https://www.gofundme.com/f/sonya-and-the-great-glass-elevator?fbclid=IwAR19_o6oRjIjr94Aipi1J1oWloBUSF6JVTiYZZRJqlqqK7IyPYpCPDJf8zI