Nottingham City Council issued over 120,000 penalty charges in last year, with Beck Street being a popular hotspot for parking tickets.

Data shows that nearly 93,000 of these fines were paid in full.

Residents have described the new spike in parking fines as unfair and that the council is not sign-posting enough to help drivers.

In comparison to the ones paid, only 7,225 were cancelled.

Will Potter, 22, has said: “I left my car on Ilkeston Road and I was 15 minutes late in moving my car.

“They didn’t tell me where my car was and I had to try to track it down.

“I was really frustrated that not only was the fine so extortionate but I had to find out myself where my car had been taken.”

Serious offences, such as parking on double yellow lines cost £70 but are reduced to half if paid within 14 days.

The data shows that certain streets in Nottingham were hit most with the fines. 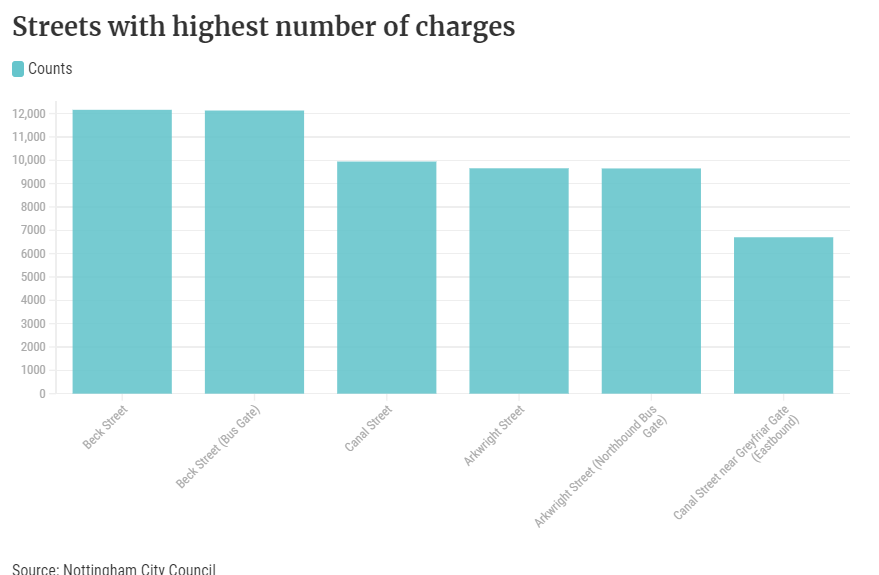 Beck Street and Canal Street had the highest amount of penalties charged with a combined total of 40,938.

The graph shows that streets were hit twice with penalty charges for the road and its bus lanes.

A Nottingham City Council spokesperson has said: “The money from the fines goes towards the cost of running the service with any surplus invested into Nottingham highway improvements.”

The street with the lowest penalty charges of 2020 was Cropton Crescent with 1 reported fine.

A Nottingham motorist adds: “I think the charges are really harsh.

“I didn’t move my car because of an injury and within two minutes of it turning into a bus lane, I was charged.

“They don’t take into consideration other factors and I don’t think the council puts up enough signs to let drivers know of the restrictions.

There have been several petitions calling for a reduction of parking fines during the pandemic.