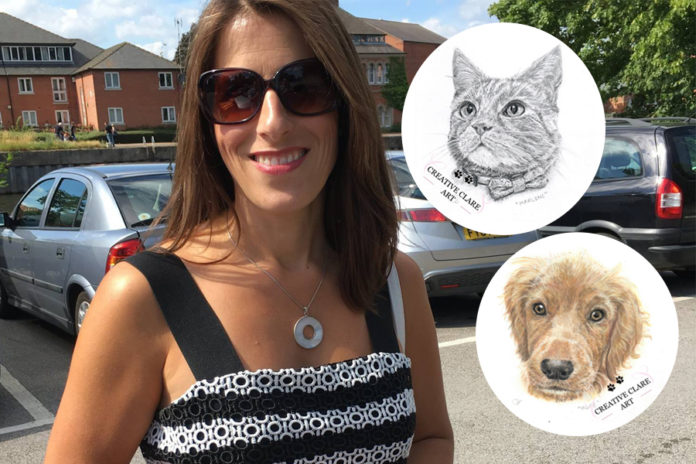 An artist from Newark has completed nearly 100 commissioned drawings since the first national lockdown in an effort to keep herself busy.

Mother of two, Clare Storr, 47, of Balderton, is the owner of Creative Clare – Art, formerly known as Creative Cakes By Clare.

Clare mainly draws commissioned pet sketches and paintings, as well as her own wildlife drawings which she uses for cards and prints.

Recently, she has also been asked to complete a series of farm illustrations by The Nest Farm School for one of their new upcoming projects.

Although details of this project have not yet been released, it will be officially announced in two weeks by The Nest Farm School.

Clare has been drawing since she was a teenager, but it wasn’t until 2017 that she decided to start doing commissions.

After a few months, she had completed over 40 beautiful commissions but soon stopped due to a lack of time.

However last year shortly before the first lockdown Clare begun drawing again, and has since completed nearly 100 commissioned pieces, with many more left on her waiting list.

Clare said: “I drew when I was a teenager at school, but then I didn’t really draw again as you don’t have time when you have children.”

“The pandemic has left me with a little more time for my art, and I’m really enjoying it.

By the end of 2020, Clare had sold over 200 Christmas cards, with some of which being ordered from Ireland and Australia.

The local community describes Clare as ‘creative’ as not only does she draw, she also paints, sews, bakes, and is a former photographer.

Clare added: “I used to spend hours baking these fantastic cakes only for them to be eaten, so it’s nice being able to spend hours on something and know it will last forever.

“People say that when they see them on the wall every day it just brings them joy, especially if their pet is no longer with them as it’s like they’re still there.”

Commissioned pieces are usually done in graphite, but Clare has also begun offering pastel and pencil crayon options in addition to this.