During lockdown, the UK has seen a large demand for family pets. But the knock-on effect of ongoing restrictions is people no longer being able to look after their animals.

Hundreds of puppies are even being sold on or given to charities like HARC Hope Animal Rescue Centre in Long Eaton, Nottingham.

The charity takes in dogs from all different walks of life. It fosters dogs for people in hospital and rehomes them if owners can no longer care for their pets.

HARC was created in 2011 after Susan Buck realised just how many people were having to say goodbye to their beloved pets due to changes in circumstances which meant they weren’t able to look after them any longer.

Hospital stays, homelessness, or changes in personal circumstances were forcing people to give up their animals simply because they had no-one to look after them.

HARC provides short-term or long-term foster homes to bridge the gap so that people and their pets can eventually be reunited. They also rescue and rehome animals that have found themselves homeless and alone.

Ms Buck, 65, who runs HARC, said: “Most people I see coming to us with animals haven’t done any research about the breeds or the needs of the animal. I’ve been asked to take dogs who have grown too big.”

“I’ve had people come to me with a puppy not being able to register its chip and it turned out that the my had come from Romania with no papers or vaccinations, with no way of it going back to the person they brought it from.”

“Since the lockdown people have jumped on wanting a puppy but are not doing enough research into it which has sparked a lot of criminals’ interests into the puppy industry.”

Although giving up a pet may come down to the personal circumstances of that individual who made the decision to purchase and is no fault of the dog’s behaviour.

Reasons that people have provided for giving up their animals include: they cannot give the puppies the attention they need, they’ve lost their jobs, did not do enough research into who much work they would be, or the type of breed they were buying. 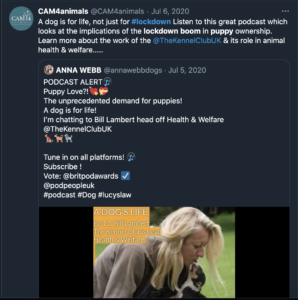 Ms Buck said: “People have gone into lockdown thinking it would be the perfect time to buy a puppy, not thinking that when they go back to work or if they lose their jobs. It’s an added responsibility so are bringing them to charities like ours – who cannot take on so many puppies who need a lot of attention when we have older dogs and cats who also need a home.”

Animal welfare charity Battersea earlier warned of the potentially catastrophic impact of Covid-19 and the effect that the first lockdown has had on dogs and cats. It said: “Lockdown led thousands of people to panic buy pets for company, with more than 40% of people who bought puppies during lockdown admitting they had not previously planned to get a dog.

“Unwanted and abandoned dogs and cats across the UK have continued to desperately need help throughout lockdown and, with a major recession looming, this is likely to get worse as owners cannot afford to care for them.”

It is safe to say that impulse buying is partly to blame for the large number of puppies being abandoned, demonstrating just how important it is to thoroughly research, not only the breed of dog but also the responsibilities and costs of being a dog owner.