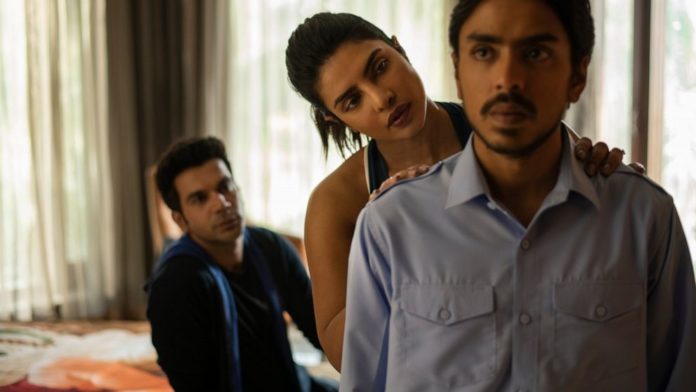 New to Netflix this week is Rami Bahrani’s The White Tiger that takes the audience on an eye-opening trip depicting the wealthy against the poor in modern India’s society.

The production is an adaptation of the widely acclaimed New York times bestselling book by Aravind Adiga that also won itself the booker prize back in 2008.

The story follows protagonist Balram (Adarsh Gourav) as he narrates us through the story of his life as a servant for the rich who his determined to prove himself as the white tiger, which is “someone who comes only once in a generation”.

The film brilliantly depicts India’s class struggles and the huge economic gap that there has become between the rich and the poor.

What this film does brilliantly in its storytelling is combining a variety of genres to explore these contemporary themes through both comedy and well as tragedy.

Balram works his way up to becoming a driver for a corrupt wealthy Indian family, and through a series of events that keep the audience on the edge of their seats (or sofas) throughout, decides he’s no longer going to be a servant but rather a master.

But the real venture of the plot is how he goes about getting there.

Without giving to much away, half way through the film an event occurs that completely switches the direction of the plot, and things start to become clear to Balram about how expendable his life is to the rich.

Following this he decides to take matters of climbing the ranks into his own hands.

Adarsh Gourav gives a flawless performance in this picture, the situations his character finds himself in as we move through the story and the decisions he has to make really allows him to explore great range in his acting ability through this character.

The supporting cast in this film are also excellent, Pink madam played by Priyanka Chopra (Baywatch) and Ashok played by Rajkummar Rao (Rahid and Newton), also give extremely believable performances that do a great job of portraying ignorant wealthy capitalists.

This film gave me real vibes of Bong Joon Ho’s parasite in some ways, but this is not to say I am comparing the two.

The plot of The White Tiger is completely original and what I mean by this is it is another brilliant film at does an excellent job of showing the struggles of poverty through cinema in really refreshing and engaging ways.

When the book was first publish, author Aravind Adiga gave explicit instructions even on the first page of the book, that if this is to be adapted into a film, he wants Bahrani to do it, and now I understand why.

Bahrani has been responsible for such great pieces of work that includes 99 Homes and Fahrenheit 451, and here it shows that he’s really in his prime demonstrated through the consistent level he’s working at.

He’s been a director that actors admire because of the freedom he allows his cast to have in exploring their characters, and he said being gifted with such a brilliant cast allowed this to work tremendously.

“I’d rather them do what they think is correct and surprise me… and the cast was always willing to do that”, he explained in a recent interview.

The chemistry between Bahrani and his actors is so clear in how the film turned out, but especially for me the performance from Adarsh Gourav is what kept my eyes glued to the TV.

I found it engaging throughout and really believe this film deserves more attention than it is getting right now, if you’re looking for a film this week to check out I highly recommend taking a look at The White Tiger which is available on Netflix now.