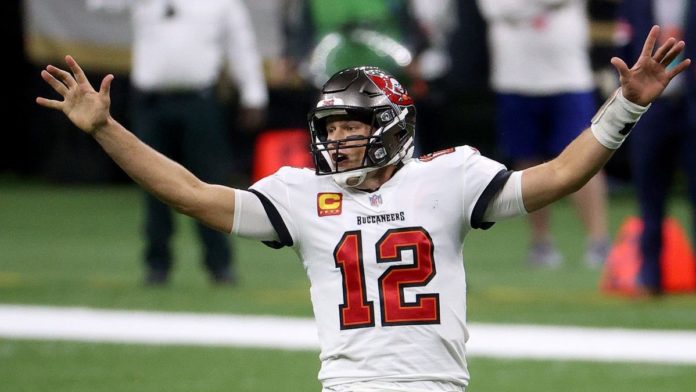 Tom Brady is going to his 10th Super Bowl after the Tampa Bay Buccaneers defeated the Green Bay Packers 31-26.

The 43-year-old once again has a chance at silverware after a dramatic game in Wisconsin yesterday. Brady and the Bucks were coming up against a very strong Packers team who contained bookies’ favourite for MVP (Most Valuable player), Aaron Rodgers, who had an outstanding season.

Tampa Bay started strong with Brady finding Mike Evans for a touchdown within their first few possessions of the game. Nevertheless, early into the second quarter the Packers scored a touchdown of their own to level the game after a great throw from Aaron Rodgers found Marquez Valdes-Scantling.

It wasn’t long however before Brady and the Buccaneers retook the lead after an impressive solo rushing touchdown from running back Leonard Fournette. The Packers proceeded to kick a field goal further into the second quarter making the score 14-10 to Brady’s bucks at the half.

Tampa Bay came out firing in the second half through great defence and some Tom Brady magic as touchdowns from Scott Miller and Cameron Brate saw the lead soar to 18. But that was quickly countered by two quick touchdowns from Robert Tonyan and then Devonte Adams of the Packers to form a great comeback, with their team now only down by 5 with the score 28-23 after Green Bay missed the extra 2 point attempt.

Back-to-back interceptions thrown from Brady followed by a poor possession meant Tampa Bay had to settle for a field goal and went up by 8, still giving the Packers a great chance to tie.

The most controversial talking point of the game followed as the Packers had a chance to score a touchdown on 4th down just 16 yards from the goal with only 2:08 left on the clock, however were instructed by the coaching team to kick a field goal for three points instead, making it extremely difficult to get back into the game as they were relying on a very quick stop from their defence.

Unfortunately for the Packers, that stop never happened and the Tampa Bay Buccaneers ran the clock down and saw the game out, taking them to just their second ever Super Bowl appearance. Tom Brady on the other hand, will be playing in his 10th.

The talk on social media for the next few days, maybe even weeks, will definitely be circulated around the Packers’ decision to kick instead of going for the touchdown, but once again Tom Brady is the man in the spotlight.

Brady will face reigning champions as well as reigning MVP Patrick Mahomes in the Super Bowl. Fans are excited to see the current best player in the league face the Greatest of all Time.

Tom Brady will have been part of 18.2% of all Super Bowls in the NFL’s history