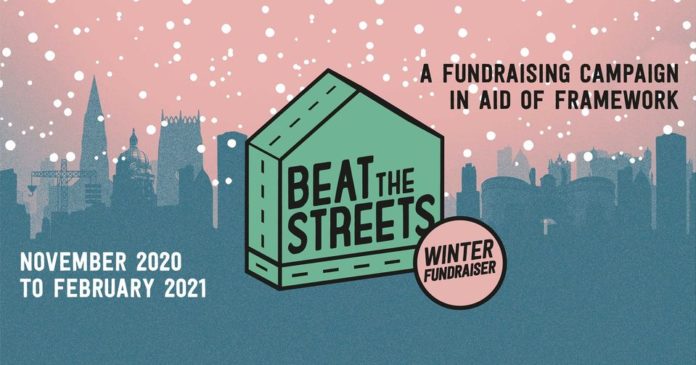 Beat The Streets winter spin-off is coming to the rescue for those who are not lucky enough to have a home during these bitterly cold and festive months.

They would normally be hosting a festival in warmer weather to raise money for Framework Housing Association, however Beat The Streets has taken a different approach to bring the extra aid needed through cold weather and accommodate the restrictions Covid-19 puts in place.

A team spokesperson said: “We’ll be shifting our focus to lots of other ways we can help to raise money and awareness, especially at this particularly desperate time over the winter months.”

They are hosting events online until the end of January, from raffles to sponsored activities and in a true sense of community, are accepting any ideas you may have.

There are loads of great prizes up for grabs such as ‘concert tickets, gift vouchers and other contributions from generous local businesses & artists’ including Rock City, Rough Trade and The Broadway Cinema.

Over the last three years, Beat The Streets events have raised around £250,000 for the Framework Housing Association to enable them to keep the ‘shelter open all year round, employ two mental health workers, and continue delivering desperately needed services’.

Framework is the leading homeless charity in the East Midlands that manages to help over 180,000 people in need every year.

Their goal is to ‘empower people to address the challenges they face and support them to live independently in our communities’.

Last year it was estimated that there were 887 homeless people in Nottingham and it is thought that this will soar higher since the recent effects of Covid-19 on communities both financially and mentally.

Alongside the Beat The Streets campaign, Framework is running some of its own fundraising activities.

Through November it hosted the ‘Homeless to Home’ campaign where people would get sponsors for as many miles as they could complete doing activities from walking to skateboarding.

Until 10 December you can donate and vote for your favourite Christmas carol; the top three carols will be performed by Southwell Minster Cathedral Choir on 23 December.

So far these two events have raised £17,000 for rough sleepers; but they won’t stop here.

The charities are grateful for any support and ask that if you see someone on the streets you call them on 0800 066 5356.