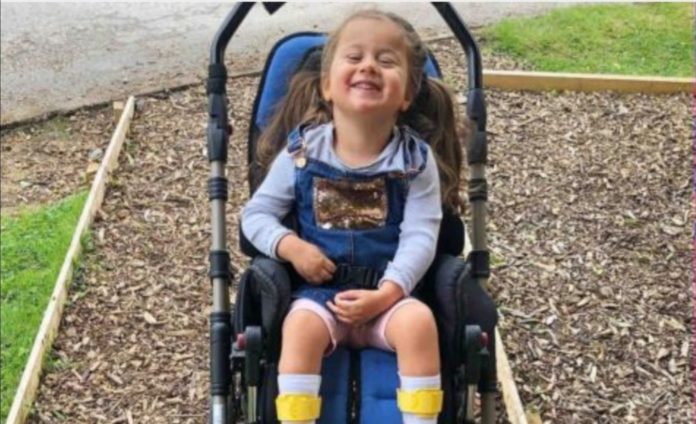 Little Ivy Hayward is known for her cheeky grin, sassy attitude and her family’s shared love of Arsenal.

To help pay these medical expenses her family set up a GoFundMe page, which received unexpected support from Arsenal star Pierre-Emerick Aubameyang.

The Gabonese international made a £2,000 donation after a member of Ivy’s family member reached out through Twitter.

Ivy was born a “very happy baby”, however at four months old, it became clear to her parents that Ivy was not reaching her expected milestones.

Now at age four, the Toton toddler, is still practising sitting and is unable to crawl, walk or talk.

Ivy was born with hypotonia, which is more commonly known as ‘floppy baby syndrome,’ a condition that means she was born very low muscle tone.

Hypotonia can affect some or every muscle in your body, for Ivy this has hugely impacted her mobility to the point where at age four, her family have to wheel and carry her everywhere.

At around 16 months old her family noticed that Ivy stopped responding to her name and dropped all eye contact.

Initially believing it was just a phase that kids go through, it soon became apparent that Ivy had a huge developmental regression.

“She could no longer say ‘da da’, clap, blow raspberries, shake her head ‘no’, or even hold toys,” Lenya said.

For Ivy, hypotonia is a symptom of an undiagnosed genetic condition.

Over the years Ivy underwent extensive diagnostic testing that all came back clear.

Her family are currently waiting on a diagnosis that has been postponed due to Covid-19.

Over the years, her family have established many therapies through the NHS.

Lenya insisted the NHS “have been fantastic with my daughter by providing supportive equipment and therapy sessions, however these are few and far between, being seen every 6-8 weeks is not enough”

Since the pandemic however, her mother says that therapies have stopped and that “we noticed Ivy hit a plateau.”

In a bid to raise funds for Ivy, Miss Athanasiou launched a GoFundMe page to ask for £5,000 so they could pay for private treatment.

“I set up the go fund me page because Specialist therapy, equipment and assistive technology comes with a high price tag.

“As a mother to a special needs’ child, you always feel like you can never do enough, I put my pride aside and looked for financial help.

“I want the best for Ivy, and she deserves the best.”

Whilst her mother insists there is no magic pill to ‘fix’ ivy, it is hoped that early intervention through private therapies will give her the best chance to treat her condition.

On the GoFundMe, they state they will put all the money raised towards ‘much-needed therapy sessions, equipment and assistive technology’ to aid with Ivy’s physical and intellectual development.

Along with weekly physiotherapy sessions to help with Ivy’s ‘mobility and strength’, the family hope to get her an Ikan brace – a full-body device to assist her with standing and walking.

After raising round £3,000 through donations from friends and family, Ivy’s cousin, Jasmine Sampson, a 30-year-old marketing manager, reached out through twitter to Arsenal forward Pierre-Emerick Aubameyang, who made a £2,000 donation to the Go-Fund-Me.

“My boyfriend told me that Aubameyang was known for doing quite a lot for charity, so I thought it would be worth sending him a tweet and asking if he could support Ivy by donating. When I saw the £2,000 donation and his name I burst into tears! I honestly couldn’t believe it.”

“I absolutely wasn’t expecting him to see my tweet or donate anything at all, let alone donate as much as he did! I had been refreshing the go fund me page every few hours since it went live a few days before it was amazing seeing friends and family donations coming in”.

“Everyone’s donations have made the whole family very happy and very grateful; we all love Ivy so much!”

After the Arsenal forwards donation took them above their initial fundraising goal of £5,000.

The family have set a new target of £10,000, with the additional funds going towards taking Ivy to an intensive therapy programme in Poland or Hungary, as well as a sensory garden for Ivy to enjoy a safe space.